Nnedi Okorafor is a Nigerian-American author of African-based science fiction, fantasy, and magical realism for children and adults. Her works include Who Fears Death, currently in development at HBO for a TV series, the Binti novella trilogy, The Book of Phoenix, the Akata books, and Lagoon.  She has written comics for Marvel, including Black Panther: Long Live the King; Wakanda Forever, featuring the Dora Milaje; and the Shuri series. She is currently creating and co-writing the adaptation of Octavia Butler’s Wild Seed with actress Viola Davis and Kenyan film director Wanuri Kahiu.

Her science fiction comic series LaGuardia, published by Dark Horse Comics, was released in late 2018 and her TED Books memoir, Broken Places & Outer Spaces is scheduled for June 2019 release.  Her debut novel Zahrah the Windseeker won the prestigious Wole Soyinka Prize for Literature in Africa and she has won the Hugo, Nebula, World Fantasy, Locus, and Lodestar Awards.

The session will be moderated by Donna Seaman, Editor, Adult Books for Booklist. A recipient of the Louis Shores Award for excellence in book reviewing and the Studs Terkel Humanities Service Award, Seaman has written for the Chicago Tribune, Los Angeles Times, and other publications. A member of the Content Leadership Team for the American Writers Museum and a frequent presenter at various literary events and programs, Seaman has collected her author interviews in Writers on the Air. Her new book is Identity Unknown: Rediscovering Seven American Women Artists. 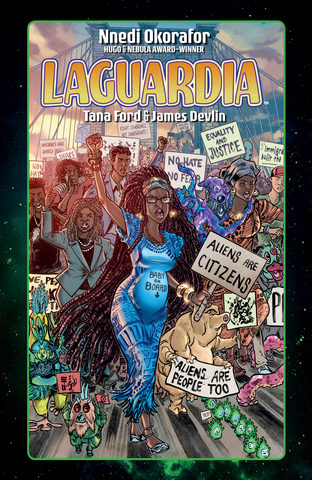